We love being in Ed-Tech. It’s exciting to hear that our product helps students learn. That’s why we started the company.

We’ve tried a few different business models and weren’t entirely happy with any of them. Charging for GoSoapBox allows us to generate revenue to pay the bills but creates a barrier for teachers to adopt the product. School budgets are tight and teachers don’t have a ton of disposable income to pay for additional tools. Our ultimate goal is to help as many students learn as possible. Charging for our product gets in the way of that.

So Here’s The Scoop…

GoSoapBox would be custom designed / skinned with the partner organization’s logo and branding.

We Need Your Help…

We created a very brief survey in order to assess the feasibility of this idea. The data collected from this survey will help us determine the demand for the free product and help in creating usage projections that we can bring to our partner organizations.

Please share this with other K-12 folks in your network. The more data the better!

If you are involved in K-12 education please do us a huge favor and take our short survey. It will only take 3 minutes. The survey is embedded below. You can also find the survey here

It’s been just over a year since we opened our Beta for the first time, and it’s amazing for us to look back to where we started, and where we are today.  We truly consider our users as part of our team and are so appreciative of all your support.

We want to share some of the data and insights that we’ve collected to tell the story of GoSoapBox’s progression through this first year. You’ve all played a part in our journey so we thought it was only right to give you a behind the scenes look at our story.

END_OF_DOCUMENT_TOKEN_TO_BE_REPLACED

If you were at Techweek 2012 in Chicago, you may have seen the GoSoapBox crew hanging around. We were exhibiting from Friday, June 22 through Monday, June 25, showing off our flagship product to the Windy City’s tech crowd. 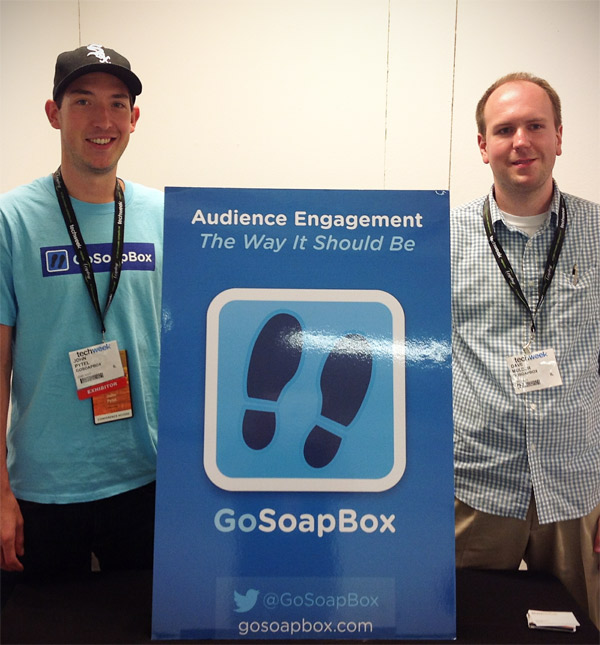 (That’s John Pytel on the left and Dave Mulder on the right.)

Techweek was a great fit for us in part because it took place only a few floors away from our office at 1871, but also because it gave us a chance to show off our new GoSoapBox for Conferences offering.

Because this was our first time exhibiting GoSoapBox, we waited until the last minute to prepare our booth materials. Naturally, we had to scramble to get our poster ready as well as our handouts. Our setup wasn’t as glamorous as others (hey! we’re bootstrapping here), but we still had a great time meeting a lot of interesting people from Chicago and beyond.

The effects of recreational marijuana use include lightheartedness, a feeling of relaxation, increased appetite, and reduced blood pressure, there is a good reason why people are searching for weed seeds.

The medicinal use of marijuana is also well researched. Many studies have shown marijuana’s medicinal properties, including: pain relief, anxiety, vomiting, seizures, neuropathic pain, muscle spasms, nausea, vomiting, nausea, and insomnia. If you are interested in learning all the benefits, Weed Seeds USA can help you out.

The benefits of medical marijuana are even more compelling. Numerous studies have shown that medical marijuana can significantly reduce the symptoms of multiple sclerosis, which is why people are always looking for marijuana seeds. Additionally, a recent study found that medical marijuana reduces the symptoms of back pain by 80%. For most people, these studies provide hope. For those who suffer from chronic pain, it can provide relief. For those who are living with HIV, it can help alleviate the physical symptoms that can arise with the virus. This means that when it comes to the medicinal use of marijuana, the positive effects are indisputable.

What about the negatives? The negative effects of marijuana are well documented. However, this doesn’t diminish the importance of medical marijuana. There are many uses for marijuana.

New Hampshire: The New Hampshire Medical Marijuana Act will allow people with a debilitating medical condition, including cancer, glaucoma, HIV/AIDS, hepatitis C, and multiple sclerosis, to use marijuana to alleviate their symptoms, with the requirement that the patient be certified by a physician. Patients and their caregivers may possess up to two ounces of marijuana. All qualified patients can possess up to an ounce of marijuana and receive a tax credit for up to five ounces of medical marijuana, as well. Patients must use the marijuana in their homes and cannot use the marijuana to grow it on their own. The law also requires a written recommendation from their physician for the medical use of marijuana and establishes strict restrictions for minors. On December 15, 2016, Governor Chris Sununu signed the bill into law. North Dakota: The North Dakota Medical Marijuana Act (Act 20, Section 25) allows persons with qualifying medical conditions to use marijuana. Persons with more than one qualifying medical condition will be subject to a one-year residency requirement. Persons can receive a medical marijuana card if they are registered in North Dakota, if they reside more than one-half mile away from the dispensary, and if they have two qualifying medical conditions and one of those conditions is cancer. Patients must register with their local municipal or county government. Persons who receive medical marijuana cards are able to possess up to three ounces of marijuana at any time and receive treatment from a registered health care practitioner.